Not too long ago, sometime during the past ten minutes, I decided that I wanted to start a series of blog post/reviews for some manga that is fitting for a keen demographic: the Chad. Without delving to far into the details, the “Chad” is the epitome of what it means to be a man. Whatever is defined as “peak masculinity” will vary, as everyone has different opinions upon the matter. Though it is often used in an ironic way, “[this] archetype representing [the] ultra-masculine, sexually attractive male” is something I intend to use in an unironic way.

Honestly, all jokes aside, I intend to include manga in this series that are fitting for the “Chad.” Anyone out there that is looking to become a better man and/or more authentic person may find these works relevant. If nothing else, these works will contain characters that carry themselves in ways that are relevant to the subject at hand.

This first work that I am going to be talking is currently ongoing. As of right now, it seems that only the first four chapters are available in English. I apologize for the inconvenience. Though the manga isn’t as philosophically dense as some of the other works I am going to include in the series, it is definitely a worthy read for Chads out there.

Recommendations from our friends don’t always pan out; they tend to be hit-or-miss. People are unique and have different tastes. Though this is the case, there are those special times when a suggestion pleasantly surprises you.

I mean this in the most serious way possible: Niwatori Fighter is based and redpilled. The credit for this can be granted to the mc himself: he is a cock.

The earth has been invaded by the kiju, godzilla-esque beasts which are bereft of any sympathy for the people of earth. In this world, humanity faces a possible and likely extinction if something does not change, and soon. In the midst of a world ripe with turmoil, who is there to turn to?

The manga’s rooster mc is an individual that answers to no one. He has no master, no one to command or rule over him. In this regard, he seems to be at peace.

His life is that of a rambler, a traveler, nay…a vagabond. Under all appearances, it seems as though that he has no aim in this world, nothing to look forward to. Simply being carried about by the day’s breeze is the fate that has been given to this niwatori

When first introduced, the mc possesses blank expressions, almost as if he were emotionless. This is an unsurprising conclusion that the reader might come to, but the idea that this cock is filled with despair could not be further from the truth. It soon becomes evident that there is a clear-cut goal. It doesn’t take long for the reader to understand that there is a motive, a reason for the rooster’s being/personal existence.

The mc’s source of power and resolve is unknown. Throughout the existing chapters, there has been little insight into the protagonist’s past. There is one particular panel that comes to mind: he has a flashback to when the kiju first began to appear on earth a year prior to the present. It shows that there was a traumatic encounter with the kijuu which left him all alone in this world.

Niwatori Fighter is clearly influenced, in more ways than one, by One Punch Man. What really stood out to me was how similar it was in terms of art style. The mangaka appears to be fond of Yusuke Muruta. Both of their designs are incredibly rich and detailed, to the point where they set the tone for a story to be told. These similarities are noticeable in the fight scenes. The whole kijuu motif that are shared by the two manga allows for these similar situations to take place. 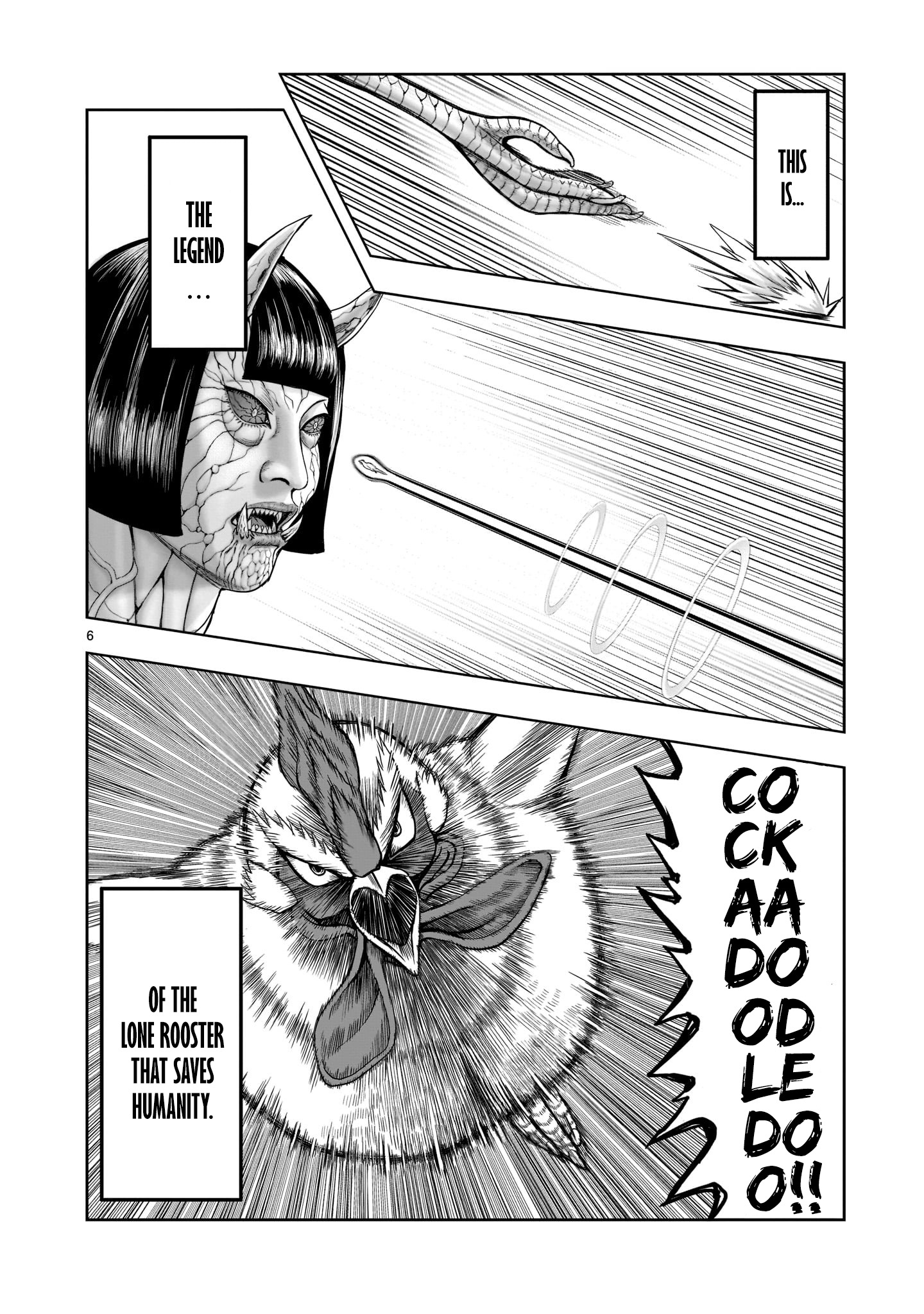 It is difficult to tell what the future holds for this manga. I sincerely hope that this continues to stick around because I have not gotten enough of it yet. The premise is the perfect amount of bizarre. Its comedic effect is strong, yet it is also able to do so while being accompanied by the dramatic. The mangaka is talented and capable of provoking different emotions within the hearts of his readers. At the end of the day, there is definitely an audience for this work. I hope that Niwatori Fighter is able to find it and get the attention it deserves.

The bulk of this post is derived from an earlier review of mine on AniList. Despite how it seems to be intentionally subverting tropes, it retains its ability to be an emotionally compelling work. I am honestly looking forward to where the mangaka will take this. It is difficult to discern their intentions with Niwatori Fighter; regardless, it is an unironically good manga. Definitely worthy of being classified as a “Manga for Chads.”