Tragedy peers its head around each and every corner. It is irresponsible for human beings to deny this truth. Each day during each moment, humans commit atroctious acts against their fellow humans. It is natural to feel compelled to do something, but the solutions to these problems seem so far out of our grasp (review may contain spoilers).

What if we could somehow ease the suffering of others, our neighbors, our fellow man? What if we were able to exact judgement upon those who are “evil.” Would we do it? Would we be willing to take up the gavel and “Play God”? 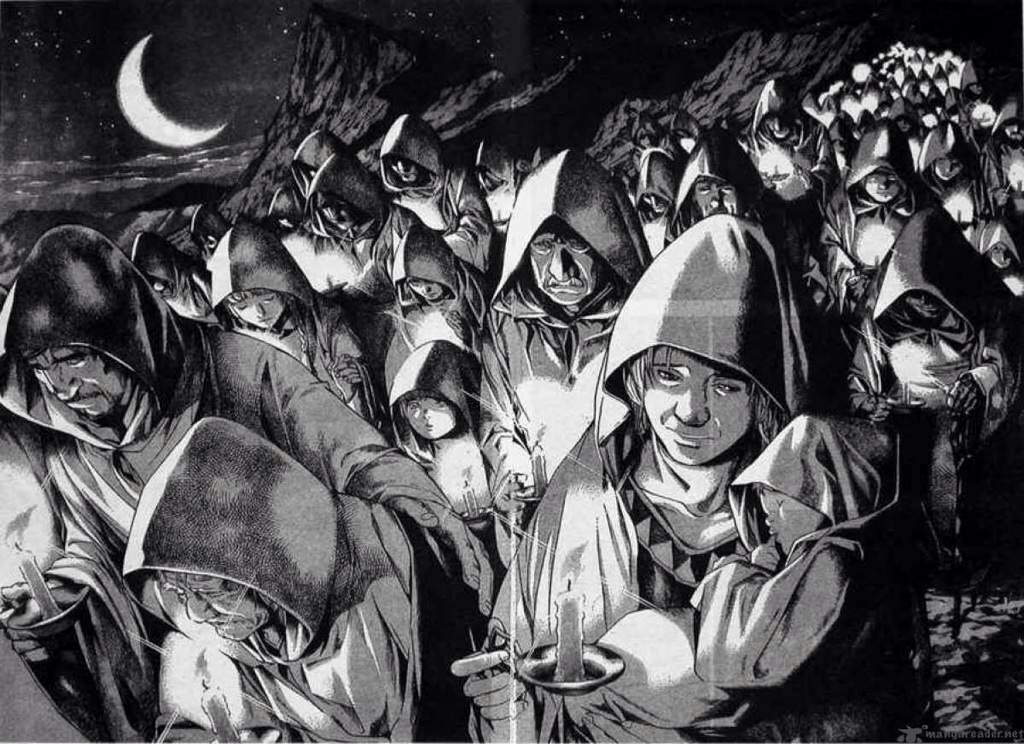 Having not seen the anime prior to reading the manga, I had no idea what to expect. The only thing I was really aware of was how popular and beloved the protagonist, Light Yagami, appeared to be. I soon found out that the work contained one of the greatest rivalries I had seen in fiction. As I began progressing through the manga, I began to search for whatever it is that causes people to be drawn to Light. He is a different take on the typical shonen MC; he’s edgy, but he isn’t tropey. This is evident in the dichotomy between the internal & external. Who Light appears to be… 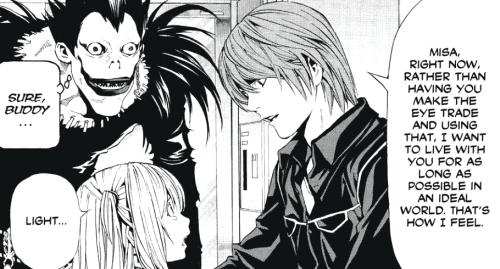 …is vastly different from who he is within. The manga constantly creates situations like this where the distance between Light’s inner monologue and external actions are put on display. This demonstration was unique, and it allows for his character to be put to the test. 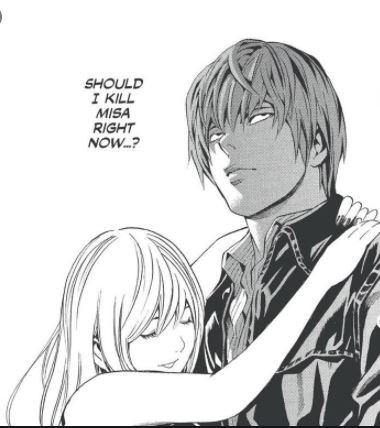 Light has been very fortunate in life. He has been granted nearly everything one could hope for. He’s intelligent, good-looking, well-educated, and he has a good family/home life. He has tools to set himself up to live a successful and peaceful life of happiness. It would be nice if life were that simple. “Knowledge increases sorrow,” after all. Light is driven by a strong conviction that there is something desperately wrong with the world. 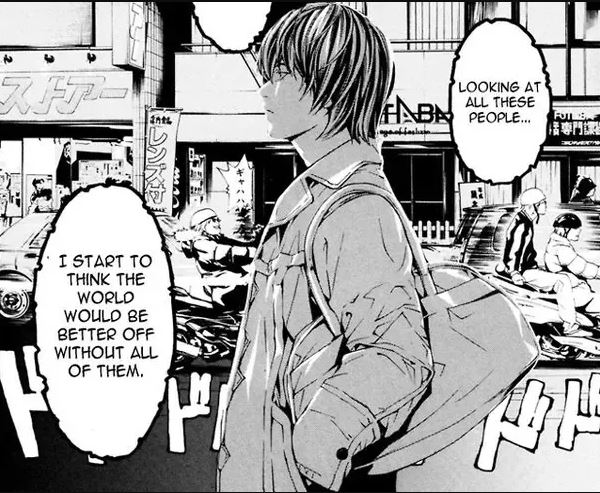 He isn’t a person who seems able to go idly through the motions of life while the world continues to suffer. Prior to coming into contact with the “Death Note,” he is filled with ennui, despair even. This notebook changes everything; it gives him a sense of purpose, one which was seemingly absent from his life before. Though there is a sense of justice within Light Yagami, it is warped at its core: he is in possession of a superiority complex which causes him to become more narcissistic as the story progresses. 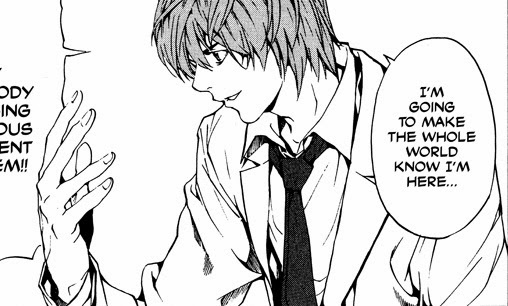 Light operates under the impression that the Death Note, combined with his knowledge and talents, will give him the power to change the world and make it a better place. Initially, this seems to be true. There is progress, as the crime rate around Japan (and eventually the world) decreases. This does not last long though. Light begins to become dishonest with himself, and he allows his self-proclaimed “judgement” upon “evil” to be reduced to nothing more than a dictatorial attempt to subdue the world to his own whims.

“No matter how gifted, you alone cannot change the world…”

Death Note‘s thematic statements are a big part of the appeal. It puts the daily tragedies of human life under a magnifying glass, and it wants us to examine these issues honestly. Undoubtedly, there is something that must be done when people commit acts of evil that breed misery for others. Though, the issues of the world cannot be solved at the tip of a cap–regardless of the power that is at our disposal. Light Yagami as a character allows for this thesis of Tsugumi Ohba’s to shine: man cannot “Play God.” We are not capable of deeming who is worthy of life; we do not have the right to pass judgement onto our fellow man. 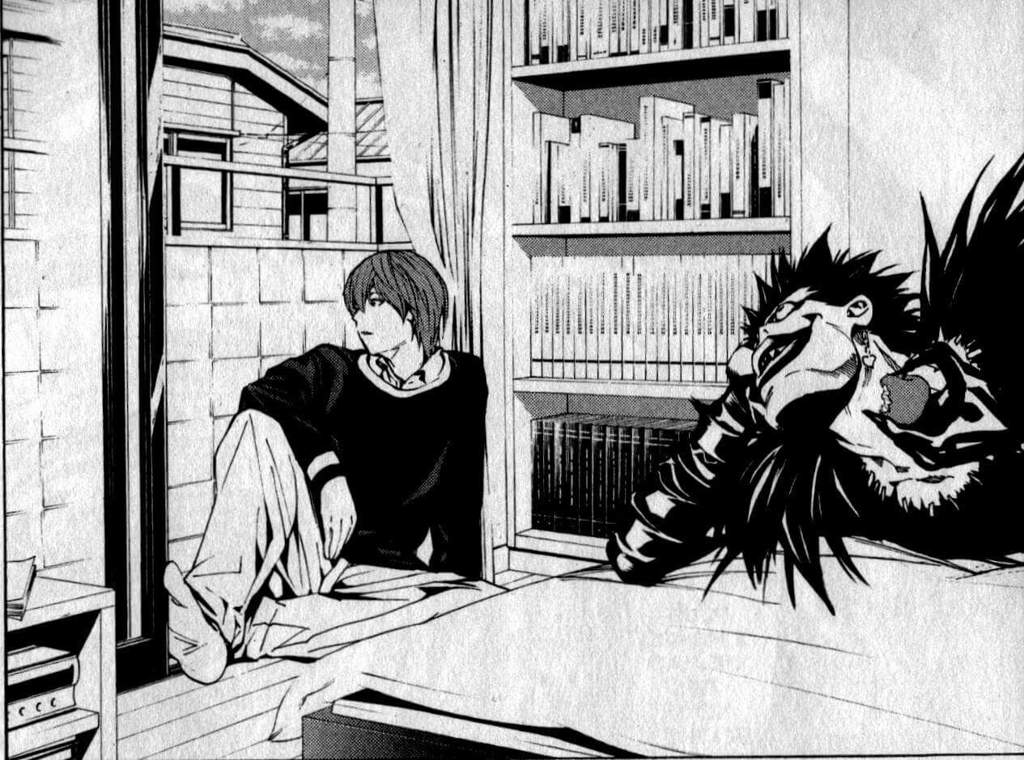 The fact that Death Note has received the critical acclaim it has throughout its duration is not a mistake. I feel that calling something a “masterpiece” should be done so sparingly. With that in mind, I would never disagree with anyone that would label this work as such. The writer and the mangaka created something special. Takeshi Obata is a legend. I cannot help but be mesmerized by his work. He has an uncanny ability to bring one’s imagination to life. Along with the illustrations, the fact that the author, Tsugumi Ohba, wrote such an engaging story with depth of character & plot allows for readers to be more fully immersed in the narrative. This is a piece of art that many would benefit from reading. It shan’t be overlooked.

This post was taken from a review I wrote some months back on AniList. I felt like making a post early this morning before work, so I thought that doing it this way would be the easiest way to do it.

Death Note has all the workings of an exemplary work; it shows what manga, as a creative medium, is capable of. Its compelling premise, one which captures one of the various human dilemmas that has plagued humanity since the beginning, hooks readers in for a fulfilling ride. It is a story that has, and always will, stick with me.

Right now, I am currently making my way through Iris Chang’s The Rape of Nanking. I took yesterday off, after having all of Monday evening making my way through it. It is one of those things where I feel obligated to be of sober mind — as clear a headspace as possible. There are truly no words. At any rate, I am going to try to finish it within the next couple days or so; not sure at the moment if I will write about it. I will exercise caution, in that regard.